Arts Mansfield is excited to be involved in the return of “Radio Theatre: Live!” to Mansfield.

Under the guidance of the late Colin Rochford, Radio Mansfield and Arts Mansfield’s popular “Radio Theatre” held a sold-out performance of “Radio Theatre: Live” in October 2019. After postponements of a similar event in 2020 and again in September 2021 (due to the Covid lockdown) “Radio Theatre: Live!” is back – bigger and better than ever – just after Easter and Anzac Day at the end of April in 2022! 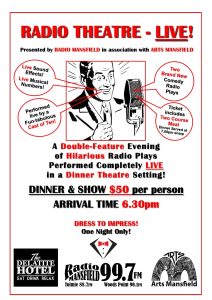 Two hilarious and original radio plays – “Old George’s Wake” (written by Adele McCormack, Mansfield’s 2016 Citizen of the Year) and “The Misadventures of Robin Hood” – performed live by a talented cast of ten.

Immerse yourself in the laughter and silliness … Gasp at the dramatic moments … Cheer the hero … Boo the villain … and enjoy the clever live sound effects that accompany both plays! There’ll even be a couple of live musical numbers!

Arrival time at the Delatite Hotel is 6.30pm for Dinner & Show ($50 per person) with a delicious two course meal (drinks available at normal bar prices). First course will be served before the first radio play, with dessert before the second radio play.

The audience size is limited to just 60, so tickets will sell fast.